Skip to content
Cart (0) Check Out
I've known for a long time that something wasn't right with my body. Even when doctors were finding no physical evidence of any kind of abnormality, I didn't feel like the person I was supposed to be, the person others thought I was; a healthy, active woman in her mid-twenties, successfully navigating a full-time college schedule while working a minimum of 40 hours a week as a nanny. So the dissonance between the way I felt and the way I was perceived by doctors and others generally resulted in me feeling like I must be completely crazy.

I was managing somehow, but there was this pervasive feeling that something was really wrong. My concentration was shot and I was constantly bombarded by weird sensory experiences like tingling in my hands and feet and all kinds of visual problems. Then in October of 2012 I started having frightening episodes that sent me to the emergency room numerous times.

They are slightly different each time, but follow a similar pattern. Often they start with a headache of some sort, radiating from the back of my neck
usually. I become lightheaded, my cognitive issues are amplified (confusion and speech difficulties especially), and I feel short of breath. I usually feel on the verge of passing out, and during one episode I fell over and think I did pass out briefly. My muscles stiffen and spasm painfully, making me feel "stuck". My hands turn into Wicked Witch claws and I've had problems signing my name for treatment consent at the hospital because of it.

I absolutely cannot function when these episodes happen. Right before I was diagnosed I had one while I was in class. I went from taking notes like normal to being really hot and sweaty, not being able to move anything, not even my eyes, having twitching on the left side of my face and drooping on the right, and all my muscles tightening up. It was pretty weird to silently have this attack in a room with 60 other people who had no idea what was going on.

The episodes vary in length from a couple minutes to a lot longer, coming and going in waves at times. Sometimes they seem to be precipitated by going into grocery stores where the fluorescent lights wreak havoc on my eyes, other times driving seems to play a causal role, and sometimes looking at a computer screen is a possible factor. It's really hard to predict when I'm going to have one and that's kind of scary. Going to the emergency room never yielded any helpful results, so when they happen now I ride them out at home. My husband and I have decided we'll call an ambulance only if I lose consciousness.

It was recommended that I see a neurologist, who started with a nerve conduction study. This was a really uncomfortable little exam where I got to have electric shocks sent to nerves in my arms and legs to see how quickly my nerves reacted. It came back normal as did the MRI and EEG that I had later. Before the testing, the doctors thought that I was either having seizures or that I had multiple sclerosis. After all the tests came back without any evidence of either, the conclusion was that I probably either had migraines with aura or panic attacks. I was asked if I wanted to try medication for one or the other. I did not. I knew there was something else going on and I was not interested in taking medications that might confound the situation even further.

About a year ago I started having very uncomfortable frequent heart palpitations, so I wore a Holter monitor for 48 hours and saw a cardiologist. All that was found was that I had PVC's and PAC's (premature ventricular and atrial contractions). The cardiologist wasn't overly concerned. It was another symptom that pretty much lead to a dead end.
I was so discouraged. And so frustrated. I spent a lot of time and money on doctors and testing and had no logical explanation for what was going on. By the summer of 2015 I was pretty much ready to give up on doctors completely. I was sick of feeling like a hypochondriac, bringing my doctors pages full of symptoms I was having, only to be told there wasn't really anything we could do short of trying to treat the various symptoms with medications.

My husband, though, was unerringly strong and supported me at every single step. We had been together for many years before my symptoms began, so he knew the way I was before and he learned to deal with me the way I am now. He encourages me to find the strength to get back the parts of myself this disease has taken away. I think the loved ones of many people with Lyme could learn a lot from him and the way he has handled the situation for all of these years. 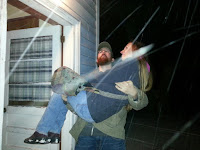 He was the one who pushed me to get tested for Lyme after he watched Punk Singer, a documentary about Kathleen Hanna from the band Bikini Kill. Hanna suffers from Lyme Disease and talks about it in the film, which I recommend watching not just for that but because it's a fantastic movie in general.

It took me several months to listen to his advice and get the test done, but I will be forever grateful to him for his prodding which was persistent but gentle and understanding at the same time.

After I've brought this blog up to speed with where I currently am in the treatment process I promise there will be a lot more content added in terms of resources and research that I've found. For now I just want to get it all here before it starts to fade away. I don't trust my brain so much anymore. It's tough for me to look at the screen for too long, so it's slow going, but I hope some of what I'm putting out there is helpful in some way, even if people just see a little bit of themselves in my story and can take comfort in the knowledge that they are not alone.