Well then! Many moons have passed and much has gone on since my last post. I've had several surgeries, went to Kansas for a week, decided to move here for grad school, and am just about to finish my first semester as a grad student in Clinical Counseling at Emporia State University. Through it all I've been trying to find a treatment that will bring me back to an acceptable level of functionality. I'm starting to come to terms with the fact that I may never be exactly the same as I was before Lyme, but I refuse to accept that I will be as limited in daily life as I am now. For several months I've been living this odd mixture of absolute appreciation and gratitude for all the people in my life who are concerned about my health and then on the other hand feeling absolutely smothered by the attention. It's not the people I feel smothered by though, it's the fact that I know there's a cause for concern and I hate identifying with that person. The person whose health is the first thing anyone asks about when I see them. It's the type of attention. Something about it makes me feel small and somehow caged in. And if there's one thing I hate being it's caged in. So I'm working on separating those thoughts and beliefs from the truth of who I am. I am not this body and I am definitely not the thoughts that this body produces.


Firstly, I saw an LLMD, Dr. P,  in March (just about a week after I got out of the hospital for the flu/pneumonia/sepsis ordeal) and because of the complexity of my symptoms and the state I presented in, they immediately started me on a rather large regimen of antibiotics and supplements. They also took a ton of blood (20 vials!) to do various testing. The initial appointment was about 2 hours long, which I think is pretty standard in the LLMD community and also necessary to get a good grasp on a patient's history. So the first visit went well. Derek drove the almost 4 hours with me and we were both just so relieved to have someone listen to what was going on and display such a willingness to take concrete steps to help me get better. They even paid attention to the lighting in the office, assuring that there were no harsh fluorescent lights which many Lyme patients have a hard time with. (Oh and side note on that point; Derek convinced me to get a pair of Theraspecs to use when I go into stores/places with fluorescent lighting and although I was skeptical, they have been super helpful and I highly recommend them!). I'm not as enamored as I once was with my current LLMD office, but they definitely were a bastion of hope in a really difficult time.

I need a bigger pill box! Do they even make them bigger than this...?

In a future post I'm going to attempt to condense all of the treatments I've done since March, but it's going to take a fair amount of work because there have been a lot. I want to get it documented partially because I want to have a record I can refer back to, but also to illustrate the point that my case is not very different from that of many other Lyme patients in terms of the number of prescriptions and supplements I've taken. The work of getting better is pretty much trial and error for everyone, since each person's body and presentation of the disease (and co-infections) are different. Many Lyme patients integrate several antibiotics plus a plethora of herbs and supplements. Some go for the all natural route using just herbs and supplements while others implement prescriptions including antibiotics, antiparasitics, muscle relaxers, and anxiety/depression medications, among other things. And sometimes people use one method for a while, see some improvement, then plateau and move on to something else. The process is all just really personalized. And trust me, it is a PROCESS! 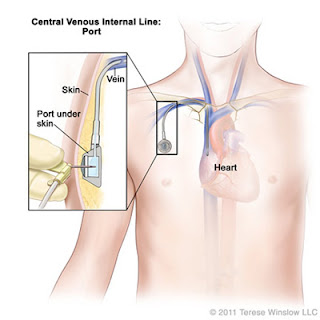 Some of the bigger things that have happened though are the surgeries I've had; I had lithotripsy at the beginning of June after a night in the hospital with kidney stones (the most pain I have ever experienced. hands down), I had a Power Port (catheter for IV infusions) surgically placed at the end of June, and I had laparoscopic surgery to remove endometriosis at the end of October. Gosh there's a lot to talk about. This is going to take a few posts to get all caught up!

My port about a month after it was placed. The protrusion that looks like a vein above it is the catheter within my vein.

Right now I'm completing a 4 week course of IV Cefepime that I have infused at the local hospital twice a day, 5 days/week. Prior to that I did IV Rocephin (again) for 3 months, just once a day, 5 days/week, with a month off accidentally in August because when we moved our insurance situation prevented me from getting treatment in Kansas. That was really frustrating because before we moved in July I was really starting to feel improvements, and then began going downhill quickly while I was off treatment and never really got back to where I was before I had the lapse. Don't get me wrong, there are good days. Sometimes several in a row. They are just tempered by challenging days. Right now I'm in the midst of  challenging days. I'm writing this as I attempt to figure out what to do next. The plan with Dr. P was to move to just oral antibiotics and herbals after this course of Cefepime, which is done after next week. Then from there to ween off of abx all together and just do an herbal protocol (either Buhner, Zhang or Cowden... I'm leaning toward Buhner).

The issue lies in the fact that all this treatment is crazy expensive. I can't afford the monthly appointments with the LLMD ($300 for a phone consultation... not covered by insurance at all). Then the cost of all the supplements and  herbs, which have been averaging around $250/month. Trying to reliably pay for that on an unreliable waitress salary is not feasible. Also, I've had some recent unpleasant interactions with the LLMD office I've been working with and I'm feeling quite over them to be honest. So the question I have to ask myself is whether I attempt to find a new LLMD here in Kansas or try to go it myself with herbal treatment. The latter makes my husband extremely nervous because he remembers what it was like before I had a Lyme Literate doctor and tried to do herbal treatments on my own. I get that. It wasn't ideal then, I admit. I ended up in the hospital around that time. But one thing my body is telling me for sure is that it needs to not have a needle stuck in it for 5 days a week, so it can begin to do things like yoga and disc golf again. I'm starting to feel like I'm trapped in a medical cage, and that's not okay with me. So whichever path I take, with an LLMD or not, I will be taking a break from IV antibiotics, although I'm not ruling out that I may need them some time in the future.

Two hours/day, here I sit. Reading, usually,
so that's a definite positive aspect.
Here's what's keeping me afloat in all this craziness: a deep belief that life is amazing. It sounds so simple, huh? That's because it is. I make a point to look for all the good things in every day, and there are just layers and layers of good things!! There are satisfying smells, cozy feelings, joyful thoughts, wonderful sights, good deeds of others I witness, and things that just make me happy for no reason! However fleeting they may be, good things are there in every single day. It takes intentional focus to notice all the good things and give them a real place in my consciousness, especially on the more difficult days when I feel totally cognitively depleted. But I try. And I think as long as I keep trying everything is inherently going to be okay.

P.S. One key thing that's been reiterated by my current LLMD, all the literature I've read, and most of the Lymies I've had contact with is that I should continue to follow a plant-based paleo diet. That's been HARD!! It's weird because for about 3 years I followed a paleo diet about 90% of the time with very little problem. For the past 6 months or so though, I've been a binge-eating disaster. I'm hungry almost constantly from the time I wake up until I go to sleep. And I'm not hungry for vegetables. I want cake. Or brownies, or potato chips, or a big sloppy cheeseburger. There are very clearly two parts of me attempting to co-exist; the intellectually sound half who knows that I could implement a diet that would be healing to my body and make me feel better in the long run, and the whining little toddler who wants that cheesy/gooey/fatty/whatever sensory gratification and wants it NOW. I have heard from many other Lymies that the spirochetes feed on sugar and that my constant cravings are really those jerks hijacking my system to try to stay alive. I'm just trying to take it one meal at a time and not give in to impulse eating or grocery shopping. And to not berate myself when I slip up, because that isn't even helpful at all.
Share Share on Facebook Tweet Tweet on Twitter Pin it Pin on Pinterest