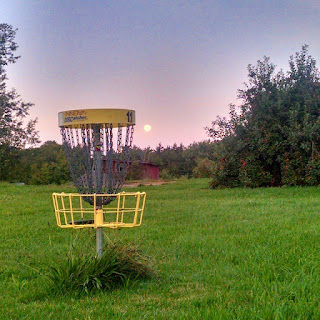 I started playing disc golf just a few months before my symptoms began (around 5 years ago). Although I have no idea where or when I was bit by the tick that did me in, there's a definite possibility that it happened while I was on a course somewhere. 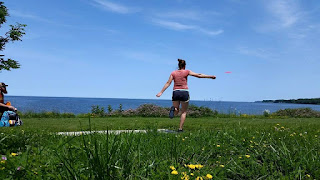 It makes me so sad to think the sport that brings me such joy may have inadvertently led to the disease that brought so much suffering into my life. I used to play as many as 3 rounds a day sometimes, with ease. Now I have a hard time getting through one round without being super weak, in pain, and short of breath. If I know I'm going to play golf (especially in a league setting where I don't have as much choice about setting the pace) I need to make sure I have time to recover after because sometimes it takes a lot out of me. 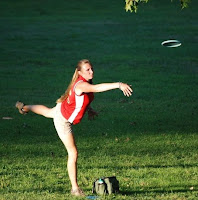 I know that all sounds like a real downer, BUT I still absolutely recommend disc golf to other people with Lyme. Of all the low-impact exercise options, disc golf is a really good one. If you are able to walk and throw a very light object (discs range from ~150-180 grams), you can play disc golf. I've even seen videos of people playing from wheelchairs. It's very inexpensive, there's no need to play competitively if you don't want to, you can do it alone or with a group of friends, and you can pretty much move along at your own pace. The disc golf community as a whole is such a warm and inviting group of people, you're bound to find lots of friendly faces. Chances are that you have plenty of courses to choose from wherever you live as more and more are being put in every year. You can look here to find one near you!
As long as I'm physically able I will continue playing this sport. I run a women's league, run and help with tournaments, and play in as many local leagues and tournaments as I can make. I'm in love with disc golf. It's been harder since antibiotic treatment started because I've been consistently feeling so much worse, but disc golf is something I'm not willing to give up.