Skip to content
Cart (0) Check Out
Since my last post things have been up and down. Good days, bad days, in between days. But none so bad that I couldn't walk under my own power. So I still count myself lucky. I've been looking into Lyme Literate MD's and not having much luck at all. I got so far as to make an appointment with one doctor but cancelled when I heard some negative things about her reputation followed by her office sending me patient history forms that already contained someone else's information. Bad sign, for sure.

The doctors who have decent reputations are charging $900 and higher just for an initial appointment. That's crazy. So I'm starting to look out of state. The difficulty lies in actually finding the names of these doctors. Because of the scrutiny of and sometimes legal action taken against doctors who actually treat Lyme appropriately, they don't advertise their services openly. You really have to dig to find the people who can help you. Even in the Facebook groups for Lyme patients, use of doctors' names is completely prohibited. It makes finding a doctor feel like trying to buy an illegal handgun or something. Actually, I'm sure buying the gun would be easier.

I've called various offices that have been recommended to me by people who say, "This doctor is amazing, he/she really thinks out of the box. I'm sure they would be willing to help you". Invariably these calls result in being told something like, " No, Dr. Rocksinhisass will not see people who have Lyme Disease". I asked one office to please have the doctor call me directly and was told that nothing I could say would make a difference, he doesn't treat "people like you". People like me? People who are sick and want help getting better? I'm sorry, I must have been laboring under the delusion that that's what doctors were in business to do.

If I didn't have all the stories of other people with Lyme to compare my experiences with I would honestly think I was living in an alternate dimension. I would probably have given up by now and convinced myself that I just would never truly be well again. But F that, man. I will be well again. And I'll advocate for those who aren't healthy enough and don't have the energy to do it for themselves.

Some women I've exchanged thoughts with recently suggested that people with Lyme should keep it to themselves so that their "weakness" couldn't be used against them (as in don't tell the people you work for/with, friends, or non-immediate family). I've seen similar thoughts echoed many times on various forums and group pages. I do not see having Lyme, or any chronic illness, as a weakness. Weakness implies a lack of strength. And that's bullshit. People with Lyme are fighting and struggling every day to care for themselves and their families, and they keep pushing to get better even when the odds are stacked so high against them. We are anything but weak.

If we don't tell people what it's really like to be in our bodies how will Lyme ever be taken seriously!? We can live our vulnerability without shame. Being vulnerable only means that we have soft spots. And that's part of being human! We need to have a little softness and flexibility or we'll break. It's extremely brave to acknowledge that vulnerability and own your own story. It empowers others to do the same and perpetuates change. We need to let others know what's going on with us so the larger discourse around Lyme can finally begin to change. 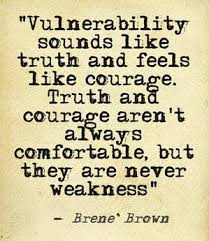