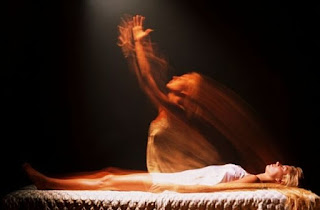 How do you explain to someone what it's like when your body doesn't feel like your own? When you can look at yourself and see that it's you, but it seems that all your internal workings have been switched up. Like your insides have been scooped out and replaced with a random set of organs, tissues, and cells. Every day I feel like my spirit, my essence, is living in a different body. Sometimes it's a body I've been in before and the constellation of sensations are familiar. Maybe it's the body that twitches relentlessly and cramps up with the smallest provocation, whose heart won't slow down to less than 120 beats per minute, and can't seem to get enough air in its lungs to maintain everyday activity. I remember this body. I know how to handle this body.

But some days things get weird. New sensations, old sensations in new places, or a combination of the two. A knee that suddenly locks up randomly throughout the day (new), flashes of electric blue light in my peripheral vision when I move my eyes (familiar), sudden strong lightheadedness (familiar), searing pain in my spine (new), stabbing pain on and off in my right kidney (kind of familiar). Is this pain something I need to take seriously and see a doctor about or is it going to pass on its own? How much pain can I endure before I can't/shouldn't ignore it anymore?

Then there's the separate category of just feeling weird. Off. Something's not right, but I can't say what it is. I just don't feel okay... I can't really feel my legs and my brain is foggy and I might pass out. Kind of. But that doesn't really explain it. No, I'm not having a panic attack. I'm breathing from my diaphragm, not my chest--I'm not doing this to myself. It might pass in a minute, or I might need to go lay down to make it go away. Whose body is this? What did it feel like when there was no question in my mind that every bodily experience was my own? I don't remember.

A couple weeks ago while my parents were here visiting from NY, I had an allergic reaction to a new shower gel (I think that's what it must have been anyway).

I've never had an allergic reaction to a product like that ever in my life that I can remember. I do have allergies to some medications and apparently a bit of an allergy to kiwi and kiwi berries (they make my mouth all itchy and Derek had to tell me to "stop eating them if they make your mouth itchy, dammit!" I'm stubborn). Anyway, within minutes of getting out of the shower I started feeling "weird" and really hot. Then my face started feeling very tight, like I had a horrible sunburn. Welp, when I looked in the mirror that was exactly what it looked like. I stood in the living room and Derek said he could see the redness just spreading all over as he looked at me. I was red all over my whole body. It was itchy and uncomfortable, and I felt like I must have been radiating 200 degrees of heat. It was ridiculous. My skin started swelling up on my arms and I started having trouble breathing, so we were off to the Emergency Room. Honestly, although I was alarmed by the reaction, I was mostly pissed because we had plans to go to brunch and I really wanted to go! Damn this body, I thought. I tolerate a lot, but keeping me from brunch... how dare you!? Within about an hour and a half though, they had me pumped full of enough stuff to get the swelling and rash to go down pretty much completely. So, most important part of the story, we still got to have brunch 😄. But the reaction was a very frustrating intrusion. Those happen a lot, although usually on a smaller scale.

I've been getting Depo-Provera shots ever since I had surgery for endometriosis in October because my doctor thinks that having periods was a big part of the problem. For the most part, I've been happy with that choice and have only had two very short periods up until now. I've had this current period for 10 days and the jerk shows no signs of stopping. It's causing a lot of pain in my right ovary and kidney, which is what happens when I have gotten a period for the past year or so. Today I called the doctor to see when I was due for my next shot, but it's not for another month. I really think that I have endometriosis on my kidney because I don't know why else this pain would happen in such clear relationship to my period. But the doctor is doubtful. It's another ugh. Body, why you have to do weird shit that makes people think I'm a loon when I tell them about it?

Feeling unwell isn't something I dwell on all day, by the way. I don't want to make it sound like I'm constantly battling my body. I think for the most part I do a pretty good job of rolling with whatever it sends me. Because obviously, it is my body. Intellectually I know that but it takes active work to keep it together when I feel as uncomfortable as I often do. There's still a part of me that gets exasperated, that wants to scream for the pain, the discomfort, the brain fog, the weirdness, to stop. If I let that snowball keep rolling my brain will eventually get to the question of why. Why is this happening? Why can such a little bug make me feel so completely shitty? Why is not a place I like to go in this instance. It's not a way of moving forward or helping to heal. So I meditate. I try to mindfully accept what I'm feeling without judging it or myself. I anchor myself in my body by doing body scans and keeping myself in the moment. Here's the part I really feel lucky about--for the most part I still feel like myself in essence. So many people with Lyme, people I know personally, struggle with neuro-psychiatric issues that cause extreme depression and anxiety. I have my moments, don't get me wrong, but it's nothing that interferes with my everyday living.


I have been being a lot more open with my professors and classmates about how I'm feeling (it's been a pretty rough month or so, partly due to insomnia really catching up with me I think). I told one professor that the fluorescent lights in the room where we have supervision were really affecting my ability to participate effectively and were making me feel unwell for a long time after our 3 hour meeting, and he actually went out and got two stand lamps for the room! It's been immensely helpful and was another step in reinforcing to me that I'm not always going to get a negative response when I disclose my illness or assert my needs. I've been so conditioned through most of the doctors I've seen for years to think that when I talk about what's going on for me I'm going to be shot down and devalued. I've had the opposite experience in most situations where I let my guard down and talk about it with people (who aren't doctors). So I'm kind of proud of the progress I'm making on that front; it's such a difficult thing for me to talk about my personal issues with other people. Even in blog form. I have to work really hard not to censor and overthink what I'm saying. I'm so appreciative of everyone who reads what I write and is willing to listen to my perspective; whether you know someone with Lyme, have Lyme yourself, or are just interested. My hope is that people get something out of this--a feeling of being understood, a new perspective, or maybe learning something new. I learn something about myself everytime I write a post, whether I intended to or not.